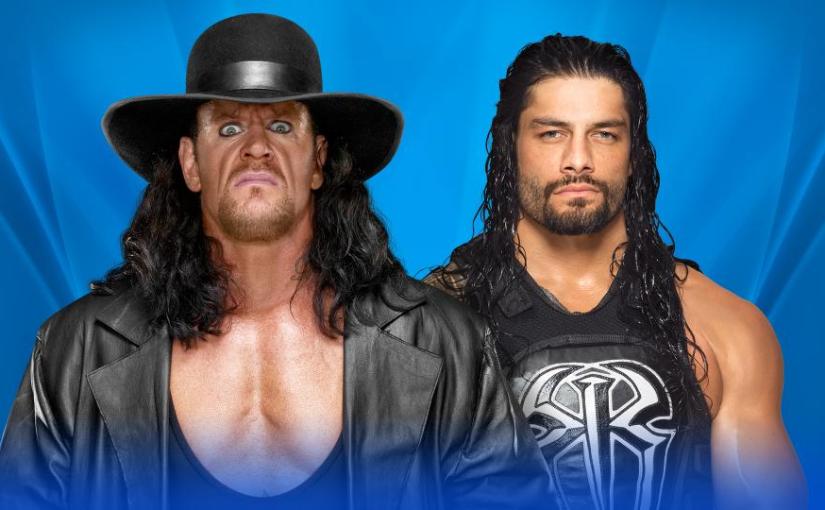 Day five. Wrestlemania is just two nights away, and the excitement is definitely building. We have the Hall of Fame ceremony tonight, NXT TakeOver tomorrow night, and then the big one. This time of the year, and this show in particular, has almost become synonymous with one man over the decades. That man’s match on Sunday night is today’s spotlight match: Roman Reigns vs The Undertaker.

This match was set up at the Royal Rumble, where Reigns eliminated the Phenom before declaring “this is my yard now”. The rivalry picked up again after Fastlane, when Undertaker answered Braun Strowman’s call for Roman Reigns to come out to the ring. Reigns didn’t take too kindly to this, and when he said as much he got a chokeslam for his troubles. Reigns responded a couple of weeks later with a spear to the Deadman. Taker has told Reigns that after Wrestlemania, a graveyard will be the only yard he can lay claim to. Reigns has told Taker – and Shawn Michaels – that Reigns is going to put the big dog down once and for all.

And really that is the intrigue of this match. It’s whether this will be Undertaker’s final bow. And if it is, how will Reigns be booked around it.

So here’s the thing. With every passing year, it becomes more and more likely that it is Undertaker’s final match. Part of the reason the streak was apparently ended three years ago was because Vince wasn’t sure Undertaker would keep wrestling. He has reportedly retired after each of his last few Mania matches, only to return at the start of the next year. Even if he’s going into Wrestlemania 33 with the intention of it being his last match, and even if people say afterwards that it was, we won’t really know until he doesn’t show up for a Wrestlemania – whether that’s next year of a few years down the line.

What does seem to be true, is that Undertaker is hurting. He has had minimal physicality over the last few months, but there have been several reports of him being in a lot of pain. It’s no secret he needs hip surgery again, and he’s been putting it off because when he has the surgery it will likely mean the end of his career. As the pain becomes more regular and more severe, it stands to reason that the need for surgery becomes greater, and the end of Mark Calaway’s career comes closer.

But I think we all know we are at least near the end of Undertaker’s career. What we don’t know, is how Roman Reigns will be booked in the aftermath.

Obviously, there is the train of thought that this is finally the heel turn. His promo on the go home Raw was a great promo, but specifically a great heel promo. Maybe this is the time WWE finally gives in, and Vince McMahon accepts the Roman Reigns project isn’t working.

But how often have we said that about John Cena? That the best thing for him to do is turn heel? There are similarities even though Reigns isn’t anywhere near the level of Cena. He’s not as much of a TV or house show draw, but he’s the top merchandise mover of the full-timers in the company (if you don’t count Cena as a full-timer, and it’s ever more difficult to do that now).

And this is Vince’s pet project, he’s not one to give up on them easily. The working plan as of right now is for Roman Reigns to defeat Brock Lesnar for the Universal Championship in the main event of Wrestlemania 34. In Vince’s mind, Reigns will be the triumphant hero displacing the tyrannical monster. I’m not sure it has to be that way, and think that Reigns can actually play the role of tyrant in that match, but somehow I doubt WWE will go down that route.

The ironic thing is a Reigns heel turn would probably get him cheered. I think he’s a step further than Cena got to, where it felt like if he just added a bit of an edge to his squeaky clean character he would be cheered by more sections of crowds. It feels like whatever Reigns does, short of a full blown heel turn, isn’t going to be enough to change people’s minds on him.

There are so many ways you could do it. Reigns could give Undertaker his second Wrestlemania loss straight up, and brag about it and turn heel through his character more than his actions. He could get so frustrated that he cheats to beat Undertaker at Wrestlemania, which would probably be the scenario for maximum heel heat. Or, he could even potentially still lose to Undertaker come Sunday night, and attack him after the match – injuring him to the extent Undertaker has to retire.

Or, WWE could give him a bit of an edge knowing what the crowd is going to be like at Wrestlemania then on Raw, and keep him face long term, accepting his reactions are going to be mixed at best. I think I can tell you which scenario 99% of wrestling fans on the internet would prefer.

The question is over whether WWE are happy with the level Roman Reigns is at, knowing he could very well have peaked with the way the current crowd reactions are, or whether they are willing to take a short term hit for long term gain. Turning him heel would cost Reigns and WWE money in merch sales for now, but his eventual face turn afterwards could see him universally loved and able to draw in much higher figures than he is right now.

Either way, it seems we are destined to have Roman Reigns at the top of the card for the foreseeable future. Whether that’s on Raw or SmackDown, as a face or a heel, we don’t really know. I know what I’d do (Raw and heel), and I have a gut feeling as to what WWE will do (SmackDown and face). Either way, it’s going to be a fun ride seeing what he can do.

But I want to turn the final word for this preview back to The Undertaker. We’ve thought before that it was the end of his career, and I’ve written about that possibility before. I just want to echo those previously written statements again here, where it looks more likely than ever that this is the end of The Undertaker. He is possibly the most legendary WWE superstar ever. His longevity is unparalleled, he has been in the ring with the best of the best across four or five generations. He is, for me, the greatest of all time. So if this is the end, thank you Mark Calaway. It’s been an absolute pleasure watching you work.