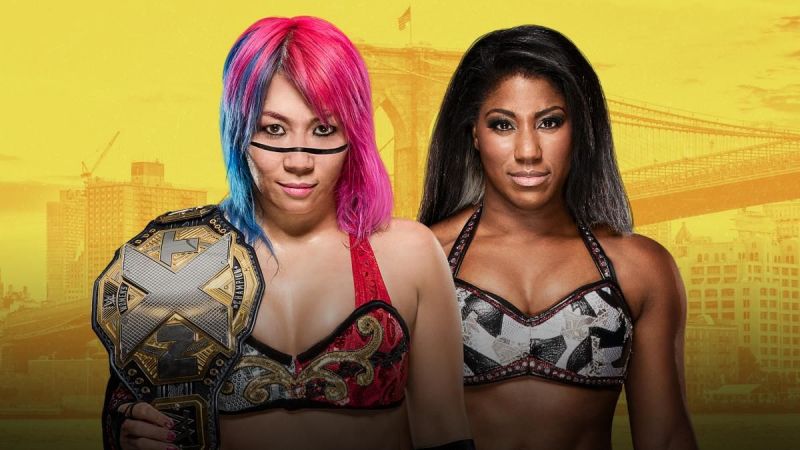 I thought it was about time I added an element to these Spotlight previews. Having done Raw and SmackDown PPVs, as well as the dual-branded shows, a look at NXT’s storylines was probably well overdue. I’ve decided to go for a match I think could have imminent main roster implications too – the NXT Women’s Championship match between Ember Moon and Asuka.

This is a story that essentially goes back to Ember Moon’s debut in NXT, which just happened to be one year ago at TakeOver: Brooklyn II. Moon defeated Bille Kay, and embarked upon a lengthy undefeated streak on the yellow brand. It was an impressive outing for Moon, highlighted by her Eclipse finisher, a beautiful diving corkscrew stunner when executed properly.

Elsewhere on the show Asuka – on a 10-month undefeated streak herself – defended her championship against Bayley in the hugger’s final NXT match. That Bayley was heading to the main roster was highly expected, so naturally speculation began as to who eventually would defeat and dethrone the Empress of Tomorrow, and Ember Moon’s display made her the obvious choice.

The two avoided each other for the next few months, with Asuka successfully defending her title against first Mickie James and then Nikki Cross, Peyton Royce and Billie Kay, and Moon beating jobber after jobber. Eventually the match was set for the night before Wrestlemania 33 – the undefeated Ember Moon would challenge the undefeated, defending Women’s Champion Asuka.

It seemed like Asuka was challenged – if not bested – for the first time in a one-on-one contest. But Moon just couldn’t put Asuka away, and couldn’t hit the Eclipse despite her efforts. When Moon went to the well one final time, Asuka pushed the referee into the ropes, unbalancing Moon, and took advantage to retain her title.

Moon of course felt cheated that Asuka would resort to underhand tactics, but her efforts to earn another title opportunity were derailed when Asuka interfered in a battle royal to determine her next challenger, attacking the final three of Moon, Ruby Riot and Nikki Cross, and injuring Moon in the process. Asuka beat Cross and Riot at TakeOver: Chicago while Moon sat on the sidelines, before proclaiming once again that nobody could stand with her. Moon of course disagreed, and after defeating Peyton Royce on her return demanded another shot at Asuka, which has brought us to tonight.

So that’s the story behind this match – Asuka is getting ever cockier as the still undefeated champion, but Ember Moon is the one who has come closest to ending that streak, and as Moon pointed out on NXT this week, Asuka has only ever resorted to underhand tactics against Moon.

But there’s a good amount of history with these two in Brooklyn too – as I mentioned before Moon debuted at this event last year, and Asuka defeated Bayley for the second time, but Asuka’s first appearance under the WWE banner came at the first TakeOver: Brooklyn two years ago, as Kana was shown and acknowledged in the crowd of the show featuring Bayley vs Sasha Banks.

Banks and Bayley went on to be the first women’s match to headline a TakeOver event, and I would have Moon vs Asuka become the second tonight.

I’m fairly sure this isn’t going to happen, but for me Moon and Asuka have the most well-rounded and longest running story going into this show. The two non-title matches very much have the thrown together feel to them despite the talent involved, the tag title match has been built from nowhere in the last month or so and the NXT Title match has been overshadowed by the personal issues between Bobby Roode and Roderick Strong. That’s not to say all those other matches will be bad, far from it, but it’s the women’s match which has the most going for it in my opinion.

Not just in the storyline engagement between the two either, so much has been made of Asuka’s undefeated record and Moon’s quest to be the first to pin the champion that I think it’s going to happen. I think it’s the right time, Moon may suffer from coming up short again, and the main roster’s women’s division needs an Asuka-sized shot in the arm. This would be a way to move her off of NXT. And if Asuka is going to lose the title, with the build-up her reign has had, it’s going to be a huge moment worthy of a main event spot, with a 20-25 minute match followed by a big celebration.

I think it’s time to move Asuka up partially because the division wouldn’t suffer as much as it has in the past. When Banks, Charlotte and Becky Lynch moved up it left Bayley as the figurehead in a weak division. Last summer, once it had been built up a bit more, Bayley, Nia Jax, Alexa Bliss and Carmella barely left a division behind. Now if you lose Asuka, you still have Ember Moon, Nikki Cross, Ruby Riot to lead the division, and potentially the entirety of the Mae Young Classic field to add to the mix. I didn’t mention Billie Kay and Peyton Royce because I would actually move them up too and team them up with Emma – not just because they’re Australian but I think their characters would mesh well together, and through the numbers game it’s a way of making all three women threats again when they’ve lost so much.

But back to Asuka. My question in these sorts of circumstances is always: what is there left for them to do? And while from a character standpoint exploring a defeated Asuka could be interesting, at the minute there are no new opponents for her to face. It doesn’t matter if she’s a heel or a face – she will have faced and beaten everybody else that’s at all credible on the NXT roster right now. On the other hand, on the main roster she has only really faced Bayley and Nia Jax. Imagine Asuka vs Sasha Banks, Natalya, Charlotte, Alexa Bliss, Paige or Becky Lynch? Naomi could be a really fun clash of styles too, with her athleticism going up against the force of Asuka’s striking game. There is an enitre realm of possibilities for Asuka, but they almost exclusively lie on the main roster. And for that to become a reality, history dictates that she has to lose her title in NXT first.

Let’s just flip that question round for a minute. What would there be for Ember Moon to do as champion? Well, the story of her finally becoming champion after a couple of near misses should give her a momentum boost in the short term, along with being the first person to beat Asuka. For a title feud, Nikki Cross and Ruby Riot are the obvious contenders until the MYC competitors join the road. Even if they don’t get called up, I wouldn’t put Billie Kay or Peyton Royce in that spot, because we’ve already seen them against Moon quite a lot at this stage, and with NXT (and WWE in general) suffering with interest levels right now that’s not the way to go. I think the two women who have gotten the biggest reactions in the last year going up against Asuka are Moon and Cross, so a feud between them is the best bet right now – and I don’t think that’s a match we’ve seen on NXT TV yet, but I know it’s been done on house shows. Long term, Kairi Sane may be the one to take the belt from Moon (assuming she wins tonight) – though that’s if Sane even goes to NXT.

Asuka is the longest reigning champion – male or female – in WWE’s modern era. She has had an incredible run, both for its longevity and its credibility through transitional periods in the NXT women’s division. But it’s time to bring that to the main roster. From day one Ember Moon was marked as the person to dethrone the Empress of Tomorrow. Tonight is the night for it to happen.