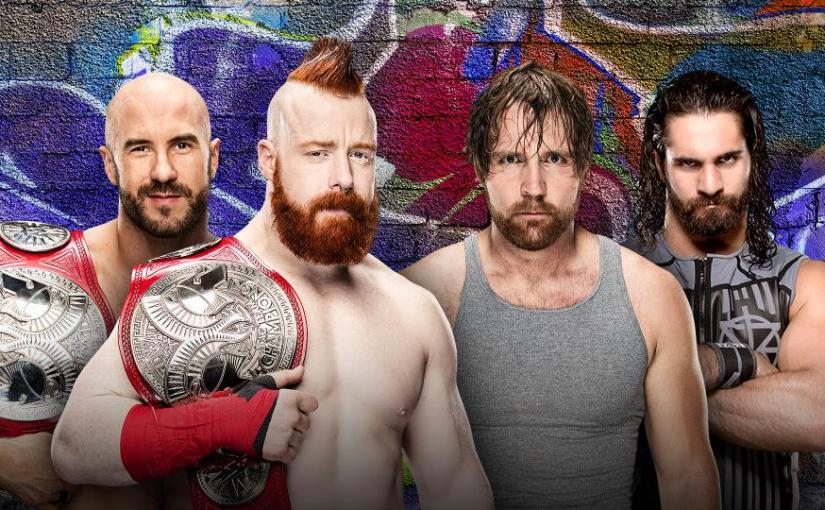 Tonight is the night WWE throws the biggest party of the summer, the second biggest show of the year, it’s SummerSlam!

Anybody else not particularly excited?

Is it just me or does it feel like the build to SummerSlam has been lacklustre at best? I mean seriously. It’s tough to get excited about a WWE Championship match featuring Jinder Mahal, but the sheer clarity that he’s out of his depth as champion is managing to muffle the buzz of a Shinsuke Nakamura WWE Title match. Randy Orton vs Rusev is a nothing match between two people who have given the fans no reason to care about them over the last three months, the Intercontinental Championship isn’t being defended, it seems impossible that Finn Balor vs Bray Wyatt will deliver on a card as busy as this and – along with the Cruiserweight, SmackDown Tag, Raw Women’s and United States Championship matches – is a rematch.

I’m aware it’s easy to be negative about WWE, and it can also be easy to focus on the bad things and overlook the positives. So I’m going to look at a match that has managed to generate a good reaction from crowds over the last few weeks. I’m going to look at the Raw Tag Team Championship match, and the reunion of two thirds of The Shield as Seth Rollins & Dean Ambrose take on Sheamus & Cesaro.

The story of Ambrose coming round to trusting Rollins again has been very well done. It’s one of those rare occasions that WWE creative actually remembers things that happened years ago, and uses logic as to how someone would react in that situation. What was it that happened years ago? Well thank you for asking the single person who wasn’t aware. This. This happened.

They took it slow in reuniting the two former hounds of justice, which was absolutely the right way to go about it. These guys, along with Roman Reigns, were brothers. They fought by each others’ sides for years, and a betrayal of that trust shouldn’t be something easily forgotten. Hell, a steel chair to the back shouldn’t be easily forgotten at the best of times, but when it was a blindside attack from someone you trusted, it should sting that little bit more. Even years later Ambrose shouldn’t just forgive and forget just because Seth returned to the face side. And he didn’t. So props to the writing team for that.

And Seth reacted well too. How long do you keep trying to change someone’s mind before giving up, thinking that it just won’t happen no matter how much you try? Of course it’s going to be frustrating, and of course you’re going to walk away unless you get some sign that progress is being made. Rollins and Ambrose’s relationship has been entirely logical over the last six weeks, and the payoff of that style of sensical writing was the ovation they got for something as small (albeit symbolic) as fist-bumping.

The beauty of that is that we still don’t know if these two really trust each other, or if they’re just banding together to fight common enemies for the time being.

I can only imagine there are complaints over two singles stars being thrown together into the tag team title picture, but I really don’t see an issue with that here. Both brands’ rosters are overcrowded with talent, while the tag team divisions on both shows seriously lack depth. If it’s a way of making people care about the tag teams more, while keeping everyone in the spotlight, then I’m all for it. There’s been speculation that Luke Harper and Erick Rowan could reunite for similar reasons on Tuesday nights, while I also wouldn’t object to pairing up Tye Dillinger and Sami Zayn if it means they’re going to get some modicum of a push. And I can’t have been the only one watching Oney Lorcan vs Danny Burch on NXT thinking those guys would make one hell of a smash-mouth tag team.

Plus, let’s not forget that Breezango, Heath Slater & Rhyno, The New Day and the current Raw Tag Team Champions – Rollins & Ambrose’s opponents tonight – Sheamus & Cesaro, all started out as thrown together teams and have gone on to have success. Rollins & Ambrose, debuting together in The Shield, at least have more history together than any of the other tandems I mentioned.

As for the champs, they needed credible opponents after finally fending off Matt and Jeff Hardy. And they don’t really come more credible than Seth Rollins and Dean Ambrose. In that duo, you have a former tag team champion, two former United States Champions, two former Money in the Bank holders, and three world championships.

As always, I’m asking myself the question of what happens next for each team. For Sheamus & Cesaro, it’s a difficult question. With The Revival being out due to another untimely injury, the only real tag team left for them to face would be Gallows & Anderson, but unless the good brothers turn face (and align with Finn Balor?) it’s unlikely we’ll get a heel-heel tag title match any time soon, plus Gallows & Anderson have been beaten so often I’m not sure people will care that much. The one thing that match has going for it is that G&A actually beat Sheamus & Cesaro for the titles at the Royal Rumble, so they might be able to play into that history suggesting G&A have the champs’ number.

If Rollins & Ambrose win, then we’ll have a series of rematches following on from tonight, and either team could eventually end up with the belts. Either way, I think we could see a full Shield reunion as part of a Survivor Series team, and long term I would imagine the plan is for Dean Ambrose to turn on Seth. If they can wait this long, it could potentially even leading to a Wrestlemania match between the two next April. Thinking about it, barring significant injuries I’d even go as far as to say that’s a likely plan that I’ll be praising in eight months’ time for the forward thinking and long term booking.

The result could go either way, but my usual rhetoric at the end of these spotlights usually goes something along the lines of “there’s enough talent in this match that this, given time, could be great.” That’s the case here too, only this time I’m going to outright say that I don’t think they’ll get the requisite time to reach the next level, because of how full the card is. I really believe that, bar the four-way main event, every match will struggle to stand out from the pack tonight. I hope I’m wrong, and I’m on the fence about the result so I’ll probably buy in regardless. But as I opened this article by saying, we shouldn’t forget about when WWE has done something right. The Shield was booked phenomenal when they were a trio, and this renewed alliance has been a success so far. So even though it’s a rare sentiment, I have to say this: good job WWE.