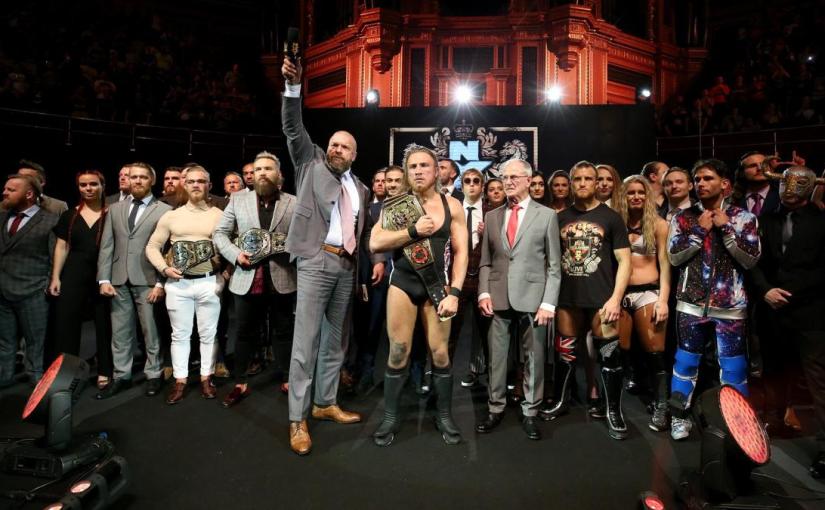 It’s an incredibly exciting time to be a UK wrestling fan. Major moves are being made behind the scenes in the UK market, and that has resulted in the official announcement of NXT UK – as well as the first four sets of tapings.

WWE seem to be creating their own tiered feeder system, and this is the first step towards creating a new tier. You’re going to have Raw and SmackDown at the top, NXT next, then the regional promotions like NXT UK that are starting up, and below them the companies WWE have working relationships with, like Progress and ICW in the UK. It could completely revolutionise the wrestling industry.

But it’s early days, and there are still questions over where and when the new NXT UK show will actually be aired, but even these happenings are so encouraging after a year of nothing really moving. The likes of Pete Dunne and Tyler Bate have stolen shows in that time, but it’s great to see others finally get the recognition that a WWE stage will undoubtedly lead to.

But because I know how easily fans of any product can turn against something, I want to take an opportunity, before these tapings even happen, to take a step back and play things down.

It’s going to be a big change for WWE. Sure they’ve done TV from the UK before, but it’s one thing to do a show twice a year with established stars in front of fans you know are going to be loud, and it’s another to try and build a new brand for a different market. It’s not like the UK superstars haven’t been around at all, but there are fans out there who only watch WWE, so these are brand new characters for them.

It’s comparable to the early days of NXT even without the brand name. NXT in 2012, even compared to NXT in 2014, was a completely different beast. WWE were still figuring out how best to format the show, how to introduce people, and who they actually wanted involved. Just look at the sheer number of different commentary teams they had at various stages over the first year.

There was a lot of turnover. But they stuck with it, and eventually they came to have a show that was regularly the best thing going of WWE. It took time, years, but they got there in the end. Let’s not forget that main roster superstars regularly appeared on NXT for the first year to help drive interest and ticket sales. It wouldn’t surprise me if that happened with current NXT stars with the UK brand, at least for the first few tapings.

The UK brand will have some advantages, in that WWE have already been through this process with NXT and should already have a better idea of what works and what doesn’t. Plus in the early stages before the show is really established, the UK crowd’s enthusiasm for having their own show should see the show through safely.

That’s going to be the big difference between NXT UK and WWE’s now second newest brand: 205 Live, which is a big part of the reason I don’t want to get too far ahead of myself. The same should have applied in that WWE had already been through the early ups and downs with NXT, but 205 Live still flopped. I’m not sure it’s even really recovered and pushed on to that next level yet.

Now obviously there are different circumstances to take into account. 205 Live has never been given the chance to become it’s own entity, it’s always been tagged on to Raw or SmackDown. That’s probably been enough of a death knell.

There were pros and cons purely from the Cruiserweight Classic. The tournament itself was probably better than the United Kingdom Championship Tournament, with a far wider scope of talent to pick from with the international flavour. That should have given 205 Live a much stronger starting point than NXT UK will have, with a stronger base to build from.

Then obviously half of the key talent in the CWC didn’t then join the 205 Live brand. Kota Ibushi and Zack Sabre Jr didn’t even sign with the company, Tajiri got hurt and released before he could make a proper full-time return, and Johnny Gargano and Tommaso Ciampa stayed in NXT. Again, that was a critical blow.

But there was still plenty of talent there, especially after the introduction of Neville, Kalisto and Austin Aries, for the show to thrive. I suspect burn out has been a big issue – both for the oversaturation of WWE content and on the writing side, because 205 Live’s key creative has been terrible at times. That has to be a very real worry for NXT UK – WWE’s fifth brand.

Look, I’m not telling everyone not to get excited about NXT UK. I can’t wait to see regular programming featuring the likes of British Strong Style, Mark Andrews, Zack Gibson, Toni Storm and Travis Banks – not to mention as a Scotsman our contingent of Noam Dar, Joe and Mark Coffey, Wolfgang and Isla Dawn. Hopefully it won’t be too long before we see Kay Lee Ray, BT Gunn, Stevie Boy Xavier and more join them.

I just worry that there’s going to be an expectation that NXT UK blows away WWE’s other shows from day one, and I’m not sure that’s realistic.

The talent is there, and WWE have taken so long before committing to the tapings that I’d like to think that now they’re doing it, they’re going to do it properly. But we as fans also need to give it some breathing space to establish itself. It took time for NXT to do that, and now it is the best WWE show. We need to give NXT UK the chance to do the same, and not write it off straight away if it doesn’t, otherwise it’ll be the next 205 Live instead.