I’ve spoken before about how the Money In The Bank contract is one of my favourite gimmicks every year, because of the storytelling options and the unpredictability it can often lead to. Tomorrow night at Summerslam, with the anticipated main event of Roman Reigns vs Brock Lesnar for the Universal Championship again, it seems to be a prime opportunity for a cash in.

The fans are not going to like Roman Reigns. If anything is a certainty on this show, that’s about as close to it as you’re going to get. But I don’t think Reigns can lose to Lesnar again. I’ve said it before, but the longer it goes without Reigns getting that ‘W’ the worse it gets. A cash in gives WWE the opportunity to give Reigns his win, but also send the crowd home happy, protect their man and give themselves a new main event feud all in one fell swoop.

But the question is, who will be holding the Money In The Bank contract by the time that match begins? 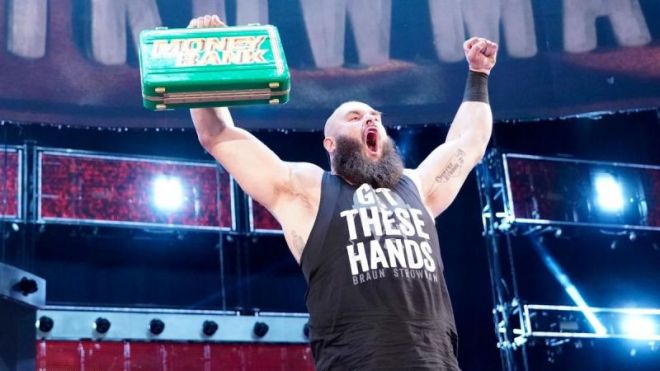 Braun Strowman is your current Monster In The Bank holder, but he will defend the contract against Kevin Owens on the show. Either superstar could be the danger man by the time Lesnar and Reigns step inside the ring.

WWE have really been playing up the fact in recent weeks that Strowman doesn’t have to be pinned or submitted to lose the contract. If Owens wins by disqualification or count out then that would be enough.

And that would protect the monster among men in losing the contract. Let’s face it, if Strowman cashes in he can’t lose. It would be a travesty, and a fate not befitting the reactions he consistently gets. But if he never gets the chance to cash in in the first place, and especially if he loses the briefcase under shady circumstances, then he would have a legitimate claim to stay in the main event title picture without being in a position where he might have to lose clean.

Kevin Owens on the other hand is a character that fits the concept perfectly. He will do whatever it takes to get success, even if that means employing nefarious means to do so. A sneaky cash in on a prone champion seems to fit KO more than it does Strowman, who wouldn’t need to sneak attack someone to beat them. And if it came to it, I’m not sure Owens would be hurt too much by a failed cash in.

That’s not to say that I think that will happen. I think it’s the best option for all involved if Reigns wins the Universal Championship against Lesnar, and then loses it to the Money In The Bank holder. It’s just a question of who will be the one to cash in.

Strowman has the history with Reigns that could lead to a blockbuster feud. He’s the most popular guy on Raw a lot of weeks, and he feels long overdue a world title reign. This could be his time. But equally because of that, Roman Reigns vs Braun Strowman for the Universal Championship has more of a Wrestlemania ring to it for me than Super Show-Down, although Reigns vs Strowman inside Hell In A Cell could be something special. 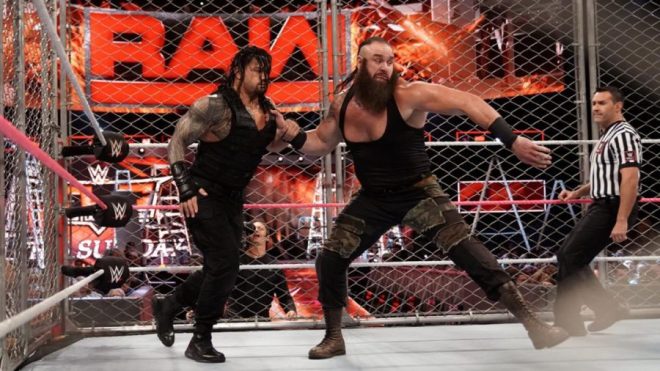 If Kevin Owens were to cash in and win, he would have two faces chasing after him for the title, and two faces who would have legitimate claims to wanting to face him. It would also be a way of really establishing a top heel, because to leave Summerslam as Universal Champion he would have to beat Braun Strowman and Roman Reigns in the same night. Ironically after his rivalry with Chris Jericho, it would be the 2018 version of Y2J reminding everyone that he beat The Rock and Stone Cold Steve Austin on the same night.

It just give WWE more story options if Owens wins. If Strowman leaves as champion, you have Reigns vs Strowman as your programme, but you also have nothing else past that. If Owens walks out as Universal Champion, you have storylines in built with Strowman and Reigns, which could either tide him over until Wrestlemania or one of those could be save for Wrestlemania and you build someone like Balor up to face him in December or January.

In terms of options, Owens also gives you an out. If Owens wins tomorrow night and holds the title until the Royal Rumble, I don’t think anyone is really going to bat an eyelid. He would be able to brag about beating two of the biggest monsters in WWE on the same night, and he would be able to brag about being the first ever two-time Universal Champion. And then he could be out of the picture by the time Wrestlemania comes around.

But if Braun wins, how do you get the title off him? If Strowman leaves as Universal Champion tomorrow night, he pretty much has to hold it until Wrestlemania, if not beyond. Ironically again, the easiest way to get the title off of him would be a cash in, but that would be out of the equation here.

We are already at the point where Wrestlemania plans affect every booking decision. I have no idea what the plan is for the Universal Championship in April, but out of the current contenders there seems to be two options to me – a triple threat between the members of The Shield, or Braun Strowman vs Roman Reigns.

The thing is that either way, you’re going to need a buffer. And Braun Strowman shouldn’t be used as a buffer. Yes it could be argued that Kevin Owens deserves better than to be Universal Champion at the turn of the year, only to be relegated down the card for Wrestlemania for the second year in a row. But hopefully Sami Zayn will be back by Mania, and that will give Owens his own story for the grandest stage of them all.

If you’d asked me what was going to happen at Summerslam a week ago, even a couple of days ago, I’d have been fairly certain that Strowman was leaving with the gold. But taking everything into account with the bigger picture, I think that the KO option makes more sense. Will it actually happen? We’ll just have to wait and see.