We’re just about a year on from the 2016 WWE Brand Extension, and I have had fairly consistent gripes with one division pretty much ever since. And that division is the SmackDown Live tag team division.

From day one (ish) depth has been an issue. In the tournament to crown the first ever SmackDown Tag Champs there only seemed like two credible winners – American Alpha and The Usos, and with the momentum Alpha still had having just arrived on the main roster it seemed like a challenge for anyone else to beat them. Then the Heath Slater arc happened, and that was fine in the short term. But there was still a dearth of anything other than jobber teams – The Ascension, The Hype Bros and Breezango would need to be built up a long way to be credible.

So with that competition, playing second fiddle so early on in their run was damaging for American Alpha. The duo were called the best tag team in the world by Daniel Bryan upon their selection on draft night, and for a long time they were my favourite team in WWE, but for a while it was as though WWE were seeing how blunt the arrow could get before they let Gable and Jordan loose. END_OF_DOCUMENT_TOKEN_TO_BE_REPLACED 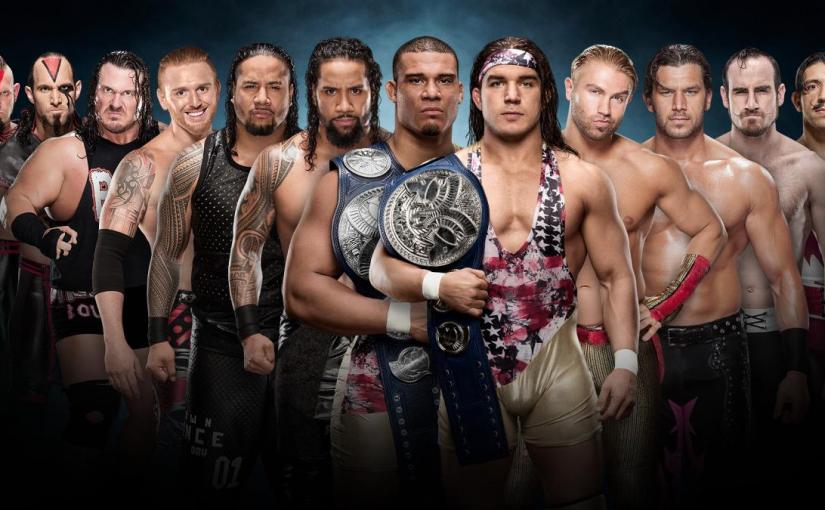 Tonight we see the return of the Elimination Chamber! It’s the first time we will see the structure since the Intercontinental Championship was defended inside the steel in May 2015. But, that’s not the match type tonight that has been absent from our screens for the longest time. And that brings me to the match I’m featuring in this article.

I’m not writing about there being three women’s matches on a PPV’s main card for what is probably the first time ever. I’m not re-visiting the Luke Harper/Randy Orton match that I kind of touched on earlier this week. No, I’m going to be writing about the match that by my calculations we haven’t seen in three and a half years, since Night of Champions 2013, the tag team turmoil match. END_OF_DOCUMENT_TOKEN_TO_BE_REPLACED