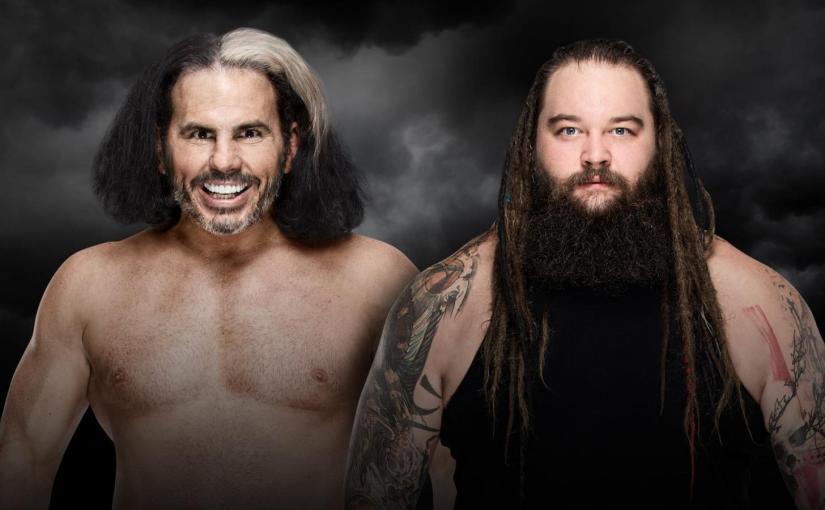 It’s another show. Yay. This past Monday’s marathon gauntlet match aside, there has been a palpable feeling that WWE has been killing time over the last few weeks, waiting until they can properly get the hype machine going for Wrestlemania. As far as Raw is concerned, we only have to wait a matter of days. But first we have to get through an utterly predictable Elimination Chamber show.

That’s not to say it will be a bad show quality-wise, but there just isn’t a great deal of intrigue. And the match I’m putting the Spotlight on this time around exemplifies that feeling – it was a pairing I had high hopes for, but that has been incredibly underwhelming. So what’s gone wrong with the rivalry between Bray Wyatt and “Woken” Matt Hardy?

Well for one, repetitiveness. The first match in this series between the two men was on the 27th November, after which Matt started deleting, beginning his metamorphism into the Woken persona. And to be fair, it was massively exciting for the first few weeks. But here we are three months later, and we’re still seeing the same promos, saying the same things. Plus, we already saw the match at Raw25, and it didn’t set the world alight, so there’s just not the same anticipation to see them do battle again now. END_OF_DOCUMENT_TOKEN_TO_BE_REPLACED

So I had the idea for a new column where I take my usual Spotlight format and look at matches, rivalries or superstars of the past. I put up a post on the blog’s Facebook page asking for suggestions of what to write about, but I thought it might be helpful if the first piece was an example of what can be done. So to kick things off, over this two-part column I’m going to be looking at two matches between two of my all-time favourites: Jeff Hardy and The Undertaker.

The first match I’m looking at takes us back 16 years to 2002. And despite this being the early days of the first brand extension, the landscape of the WWE was unbelievably different. When tensions first appeared between Jeff and Undertaker, Ric Flair still owned 50% of WWE, Stone Cold Steve Austin hadn’t taken his ball and gone home, there was a single Undisputed World Champion who appeared on both Raw and SmackDown and the Deadman, well, wasn’t a dead man. END_OF_DOCUMENT_TOKEN_TO_BE_REPLACED 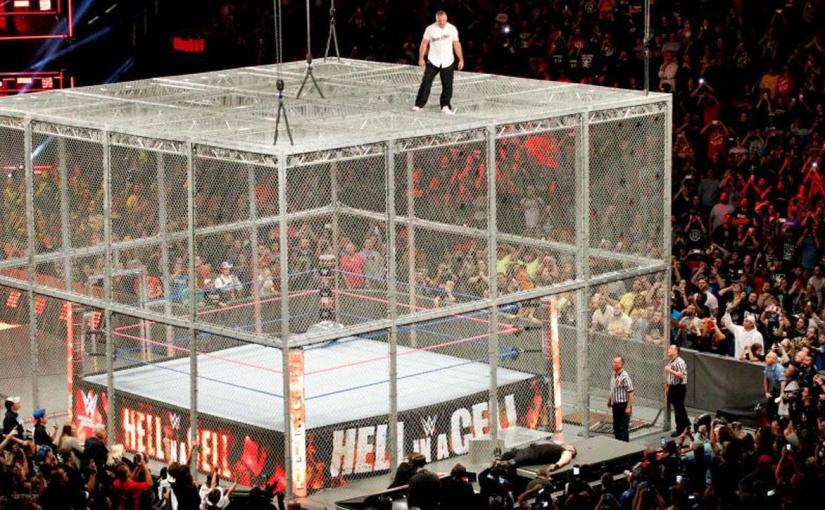 Wrestling is an incredibly dynamic industry where everything can change in a matter of days – if not hours – and 2017 has really typified that in WWE. From wholesale roster changes, to walk outs and injuries, you can never predict what’s going to happen next, not that I won’t keep trying. As the year draws to a close, what better opportunity than to look back and reflect on the memorable moments WWE gave us in 2017?

This is the final part of my 2017 Spotlights, you can find the first three below:

The reunion of Seth Rollins and Dean Ambrose naturally invoked memories of The Shield, and got the fans wondering if the third piece of the puzzle would come together. As it turned out, three and a half years after Rollins slammed a chair into Roman Reigns’ back, The Shield returned as a united force. Battling against their common enemies of The Miz, The Bar and Braun Strowman, it was fantastic to see the ever-popular trio working together once again.

END_OF_DOCUMENT_TOKEN_TO_BE_REPLACED

This is going to be one of the most disjointed columns I’ve published in a long time. Usually I like to write to make a point, to address one or two ideas through exemplification and analysis. There will be aspects of that here, but there were so many things I wanted to talk about it is a bit of a mish-mash of ideas. That is because last week, I went to the Raw house show in Glasgow and the Aberdeen house show in Aberdeen – and when you see so much, it gets you thinking about a lot of different things too. 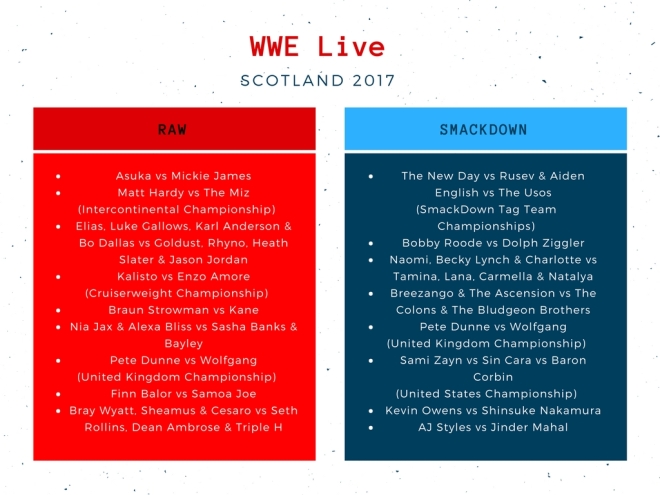 END_OF_DOCUMENT_TOKEN_TO_BE_REPLACED

It’s time to write the final leg of my journey to Wrestlemania with the Raw men’s division! This part covers the period between the night after the Royal Rumble right up to Wrestlemania, with some outlined plans for what I would have afterwards too. For the story so far, make sure you read Part 1 and Part 2, but if you’re up to speed let’s pick it right up the night after the Royal Rumble!

On social media before Raw, and during the show, “Kurt Angle addresses Samoa Joe” is promoted as the main event segment.

Promos: – Roman Reigns comes out to start Raw, talking about winning the Royal Rumble for the second time. He simply says he is going to Wrestlemania to face Brock Lesnar, and he will win the Universal Championship. END_OF_DOCUMENT_TOKEN_TO_BE_REPLACED

It’s Part 2 time! This is the project where I take the men’s division on Monday nights, and detail what I would do with them, and how I would go about it. Simple right? You can check Part 1 for a refresher of the base rules I set myself, as well as what I’d done so far, but for simplicity here’s the “need to know” notes for as far as Survivor Series:

I think that’s all, so let’s pick things up again the night after Survivor Series! END_OF_DOCUMENT_TOKEN_TO_BE_REPLACED

It was always going to happen. Once I’d mapped out how I would book SmackDown through to Wrestlemania, it was only natural that I’d look at Monday nights at some point too. This is going to follow the same broad rules I set myself for the SD column – I can’t change storylines that are already in development, I have to write some sort of conclusion to them – and like the Kevin Owens/Shane McMahon feud I still work towards matches that are expected in the future. I’m also still assuming there is a PPV roughly every month, even though WWE haven’t yet announced as much. And I can’t magically heal anyone who is injured, I have to work with their expected recovery time, which means no Big Cass or Jeff Hardy.

I’m mainly dealing with the Universal and Intercontinental Championships (though I do briefly discuss the Tag titles early on), and on that note I only have Brock Lesnar wrestling in “Big-4” PPVs from here on out. I had anticipated while writing the SD column that John Cena would be on Raw through to Survivor series, and would then take a few weeks off from there, but since he seems to be gone for now he stays off TV until his return to SmackDown, and he won’t reappear in Raw storylines until after the Royal Rumble. As with my SD columns, if a show looks empty, that’s because I anticipate more focus will be given on those weeks to the women’s, cruiserweight or tag divisions. END_OF_DOCUMENT_TOKEN_TO_BE_REPLACED I may have burst out laughing when I heard that WWE were genuinely putting on a show titled “Great Balls of Fire” (luckily I was in the midst of other wrestling fans who were doing exactly the same), but what we have ahead of us tonight is the potential for a really good wrestling show. It just goes to prove that if the content put in front of us is good enough, it doesn’t matter what it’s called.

Which is an idea that I could quite readily apply to “The Bar”. And that brings me to the Spotlight match for tonight, which in itself is extremely rare. As far as I can find, there have only been two of these kinds of matches in WWE since 1989, and neither of those had anywhere near the potential quality of tonight’s edition. I am of course, talking about the 30-minute Iron Team match between the Hardy Boyz and Cesaro & Sheamus for the Raw Tag Team Championships. END_OF_DOCUMENT_TOKEN_TO_BE_REPLACED