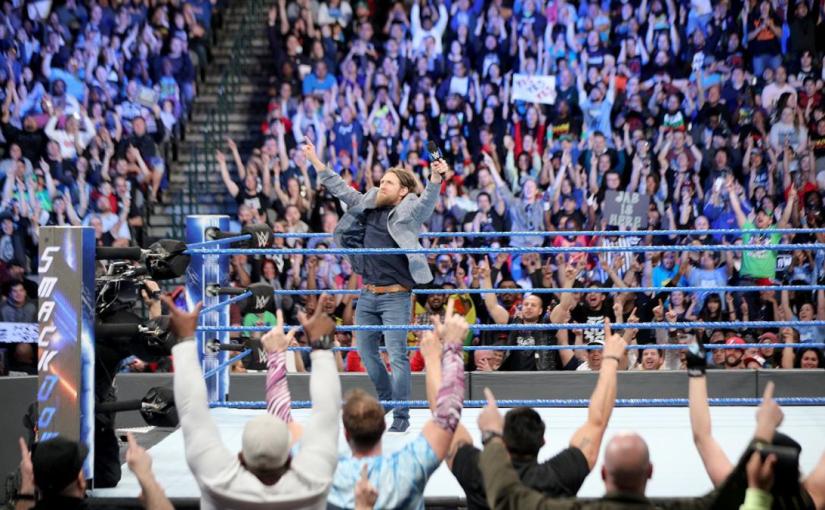 What a week! There’s been so much going on in WWE, it’s easy to forget we’re only 17 days away from Wrestlemania! Let’s just get right into this bumper edition of WWE’s TV Talking Points.

Putting the Big Dog down

This week we finally got a confrontation between the reigning, defending, undisputed, Universal Champion Brock Lesnar faced off with his number one contender Roman Reigns. The story is that Lesnar turned up when he thought Reigns wouldn’t be there – whether that’s because he saw it as a low risk night off, or because he fears Reigns is up to you. But of course, Reigns did show, and got absolutely demolished. The worrying thing is that I wasn’t convinced WWE’s effort to get the fans on Reigns’ side was working before. After the news that broke the next day (much more on that later), WWE’s fight has possibly never been more doomed.

END_OF_DOCUMENT_TOKEN_TO_BE_REPLACED

It was the go-home week for Fastlane, but on Raw and NXT Wrestlemania weekend started to take shape! So what was set up? What do we have to look forward to? I’ve rounded up the top moments of the week right here!

It’s been rumoured for a long time, and there has been a lot of speculation about who her partner would be, but on Raw it was confirmed that Ronda Rousey would make her Wrestlemania debut in a mixed tag team match against Triple H and Stephanie McMahon, and her partner will be… Kurt Angle. They have the link that both are Olympians, and they’ve already been playing into The Authority’s history with Rousey at Wrestlemania 31 and Angle at last year’s Survivor Series. I think this match will exceed expectations in the same way AJ Styles vs Shane McMahon was a highlight of last year’s Mania – with the names involved it will likely be planned and rehearsed to the second, which is probably an assurance of quality.

We’re finally seeing progression with the Woken Matt character. Some of the highlights of Broken Matt in Impact Wrestling were his skits at the Hardy Compound, and the likes of Total Nonstop Deletion and the Final Deletion. Now, it’s coming to the WWE. Matt invited Bray Wyatt to partake int he Ultimate Deletion. If they are allowed to be as creative as House Hardy was in TNA, this could be what pushes Woken Matt over the top. Equally, if it’s like Wyatt’s House of Horrors match, it could ruin the gimmick. The kicker is, the match has already been filmed. When will it air? Who knows. It could be next Monday’s Raw, it could be Wrestlemania. Either way, the anticipation is simply delightful.

Paul Heyman is a genius. That’s nothing new to most of the WWE Universe, but I’m not sure it can ever be repeated enough. I wasn’t sure that WWE’s aim of getting Brock Lesnar booed and Roman Reigns cheered going into Wrestlemania was in any shape or form achievable, but we’re just a couple of weeks in and it looks like they’re getting there. They still have four weeks to go, and they’ll need to keep things fresh and not overdo the “absent champion” line, but so far so good.

I know I covered the promo segment between The Usos and The New Day last time out, but my god have WWE’s production team pulled something out of the hat in recapping it. This clip has everything: history, motivation, intensity – basically anything you’d want in an epic rivalry, this video shows off. It gave me chills.

It wasn’t that long ago that AJ Styles vs Baron Corbin vs Dolph Ziggler vs Kevin Owens vs Sami Zayn was slated as the main event for Fastlane, but instead we got that exact match on SmackDown. As could have been expected going in, it was all action, but with a potentially big moment at the end. Sami Zayn won by pinning Kevin Owens after a Helluva Kick. There has been dissension brewing between the best friends for weeks, and at the minute it looks like they’re being set up for a match down the line. For me that’s way too early, this could be a multi-year story that results in an all-time great match. I really hope they don’t blow it off in a matter of months.

NXT gold to Fade to Black?

On the yellow brand this week Killian Dain and Aleister Black faced off, with the unconfirmed stipulation that the winner would go on to face Andrade “Cien” Almas for the NXT Championship at TakeOver: New Orleans. Black ended up coming out victorious, and after the show William Regal announced that he would indeed challenge Almas the night before Wrestlemania. Black would have to be the favourite to win the title, and as he is the closest thing NXT has had to that next level face of the brand since Shinsuke Nakamura and Finn Balor, that could be a very good thing indeed.

And there we have WWE’s week of TV for the start of March! Next week’s edition will be a little longer due to Fastlane being included, but from there we are on the final straight to the biggest show of the year. You might have heard about it, Wrestlemania 34!

Wrestling is an incredibly dynamic industry where everything can change in a matter of days – if not hours – and 2017 has really typified that in WWE. From wholesale roster changes, to walk outs and injuries, you can never predict what’s going to happen next, not that I won’t keep trying. As the year draws to a close, what better opportunity than to look back and reflect on the memorable moments WWE gave us in 2017?

This is the final part of my 2017 Spotlights, you can find the first three below:

The reunion of Seth Rollins and Dean Ambrose naturally invoked memories of The Shield, and got the fans wondering if the third piece of the puzzle would come together. As it turned out, three and a half years after Rollins slammed a chair into Roman Reigns’ back, The Shield returned as a united force. Battling against their common enemies of The Miz, The Bar and Braun Strowman, it was fantastic to see the ever-popular trio working together once again.